Have you been looking around for the fastest setups in Assetto Corsa Competizione but struggled to find any good one?

We all know how essential having a great GT3 car setup in ACC is, especially in such a tricky circuit like Indianapolis.

This track has been recently introduced from the American Track DLC together with COTA and Watkins Glen bringing a whole new challenge to the game. All its medium-speed corners are very technical and will require the car to be very reactive on the front and quite loaded in terms of downforce.

We’ve put together a setup guide that will surely help you get your McLaren 720S GT3 around Indianapolis quicker than ever before.

Have a look at this onboard video with the McLaren 720S GT3 to see what lines you should be doing in Indianapolis.

Where you can get ACC Indianapolis Setups – McLaren 720 GT3

You can get our McLaren ACC GT3 setups by visiting our shop at setups.solox.gg and checking the McLaren GT3 section. 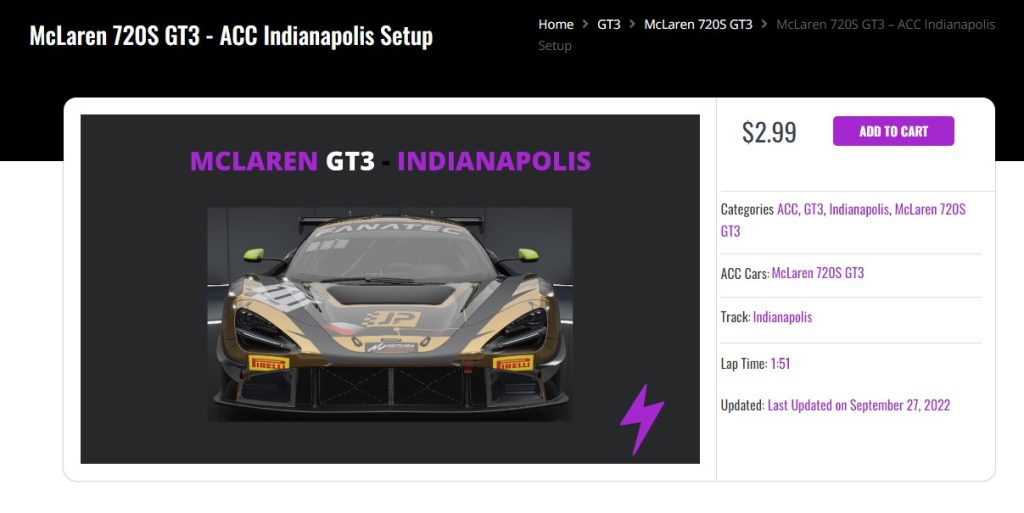 Driving fast around Indianapolis with the McLaren 720S GT3

For you to be quick around Indianapolis with the McLaren 720S GT3 you’ll have to have lots of traction as well as a very strong front grip to be quick in the change of direction.

In addition to that, you’ll want to run quite a limited amount of downforce in the car as it will help you carry more momentum in all the medium-speed corners.

Run the front splitter at 0 and the rear wing at 7 and then consider going to 5 to see if you can handle it and perhaps improve your straight line speed.

In terms of anti roll bars you’ll want to run relatively stiff overall in order to get quite a reactive car in the change of directions.

For a qualy configuration, run aRB 11 on the front and aRB 8 on the rear should be good enough to generate plenty of mechanical grip and traction without also having too much understeer at the apex.

The McLaren is ususally pretty strong in terms of mechanical grip so you can focus more on generating a good Aero balance and top end speed.

Having said that, once you’re setup is good enough, make sure you then spend some days relentlessly practicing and improving your driving.

That will get you faster lap times and pay really good dividends in your sim racing career.

Here are all the other ACC GT3 Car setups including the McLaren 720S GT3 ones in case you were interested. 🙂