Looking for the best Assetto Corsa F1 car mods to pick among dozens of different choices?

In this guide, we’ll go through eight of the best car mods available for AC.

Whether you’re looking for new cars to add to your garage or ways to improve your track records with more powerful F1 cars, these mods are sure to give you lots of fun, but most importantly a leg up on the competition

So having said that, let’s get started!

Let’s now have a look at each of these Assetto Corsa F1 mods in more detail.

This car is a great examp  le of an Assetto Corsa mod that perfectly replicates its real-life replica.

Raced by Felipe Massa and Valtteri Bottas securing 4 podiums back in 2015, it’s a great car to add to your collection. 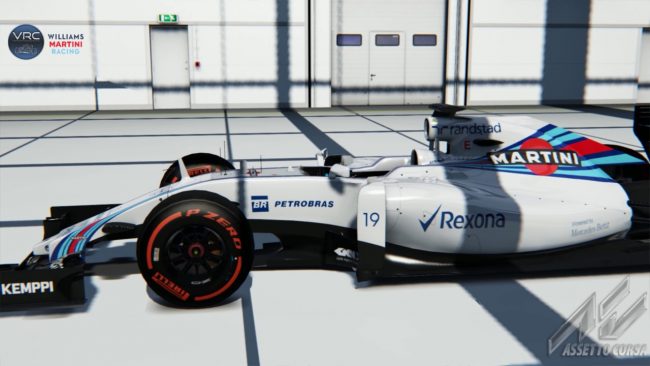 It’s very fast and handles well on different tracks, making it a great choice for most sim racers.

Not only does the mod look and feel great, but it’s also very accurate in terms of performance.

For these reasons, the VRC Williams FW37 2015 is one of the best, if not the best, F1 mods for Assetto Corsa.

The Ferrari F2002 is a classic F1 car that’s still a lot of fun to drive even by today’s standards.

This mod is a great choice for anyone looking for an old-school F1 experience. 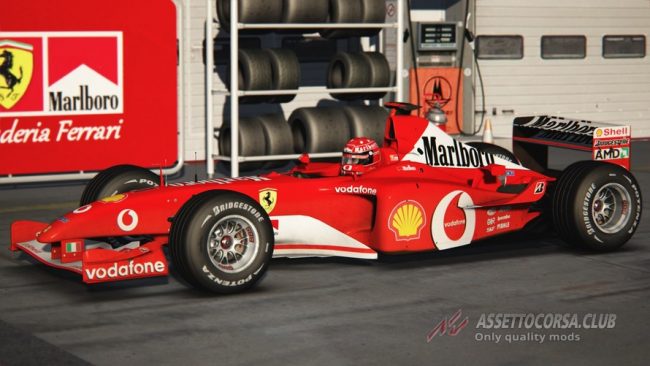 The car is a beast and has got tons of downforce, making it a blast to drive on any track.

What’s more impressive is that the mod is also very well balanced and feels great to drive on all different tracks.

Another great choice for anyone looking for an old-school F1 experience is the Ferrari F310B 1997 VRC mod.

This car is a throwback to the 1997 season and is a great choice for anyone who wants to experience what it was like to drive an F1 car back in those days.

Raced by Michael Schumacher and Eddie Irvine, this car is a real beast on the track.

With blistering top speeds and great downforce, it’s sure to give you a lot of fun on any Assetto Corsa tracks and conditions.

Always in 1997, the Williams FW19 was raced by Jacques Villeneuve and Heinz-Harald Frentzen.

This mod is a great choice for anyone looking for a well-balanced F1 car to drive on all different tracks.

Also, the car skin is the exact replica of the original car, making it a great choice for anyone looking to add some historical flair to their racing experience.

This F1 car was raced by the legendary Juan Pablo Montoya and Ralf Schumacher in the 2002 F1 season.

The Williams FW24 will give you a proper feeling behind the wheel making it seem like you are really in an F1 car.

What’s more, the mod is very well balanced and will allow you to achieve impressive lap time after a few training sessions.

Designed by Gary Anderson, the Jordan 191 was raced by Gachot, Zanardi and Andrea de Cesaris back in 1991.

If you’d like to get a nice throwback to the early days of F1, this is the mod for you.

This car is a bit more difficult to handle than some of the other mods on this list but is a lot of fun to drive when you get used to it.

This car was raced by Ralf Schumacher and Juan Pablo Montoya in the 2001 F1 season.

Although it didn’t win many races, this car is still one of the best F1 cars in Assetto Corsa.

The sound of its V10 engine is simply amazing and the car itself handles very well on most AC circuits.

For the McLaren fans out there, this mod is a must-have.

The McLaren MP4/4 was raced by Ayrton Senna and Alain Prost in the 1988 F1 season and is still considered by many to be one of the best and most prestigious F1 cars of all time.

The mod is a great choice for anyone who wants to experience what it was like to drive an F1 car in the late 80s.

It’s fast, grips well in the fast corners well and sounds amazing. What more could you want?

The Ferrari F2002. Its V10 engine has an impressive sound and in terms of downforce, it’s one of the strongest cars on this list. It’s also very fast and handles well on different tracks, making it a great choice for probably most F1 sim racers.

That doesn’t mean that the other mods on this list aren’t any good, they’re just not as good as the Ferrari F2002.

So, if you’re looking for the best Assetto Corsa F1 mod, the Ferrari F2002 is certainly the one to go for.