But with so many steering wheels and wheel bases on the market, which one should you actually buy?

In this Fanatec Podium F1 DD2 review, we’ll help you take a step closer towards that decision.

But before getting started, you have to know that the DD2 is not only compatible with all the current Fanatec steering wheels and pedals, but it’s also prepped for future upgrades!

In fact you can rest assured that your wheel base will not become obsolete in 5 years from now so that you won’t have to spend extra money in the long term.

What is the Fanatec Podium DD2 good at?

The Fanatec Podium DD2 is a medium-price wheel base that offers incredible features making it so realistic to race on. 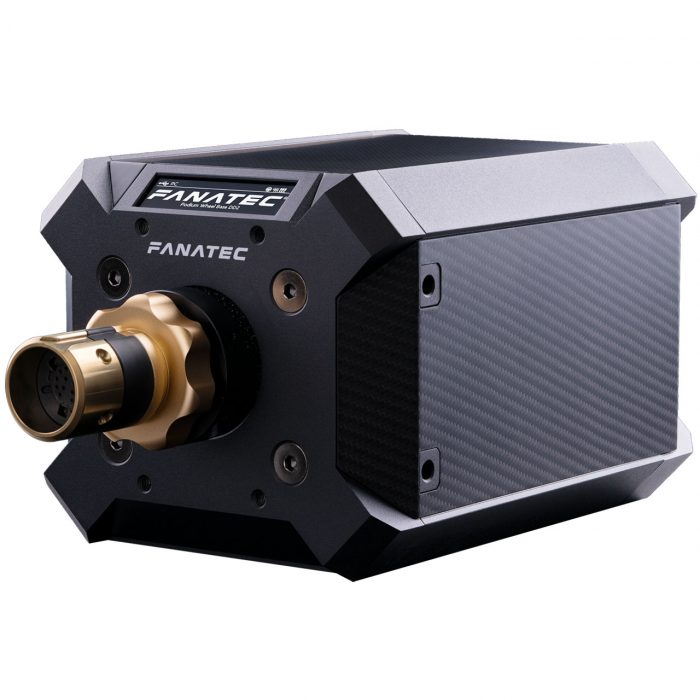 Moreover, it also offers an insanely strong 25Nm torque with a direct drive FFB making the wheel responsive and accurate, thus allowing you to control the car better and improve your race lap times.

That outstanding 25Nm peak torque is unmatched by any other wheel base in the sim racing industry which make the Podium DD2 unique.

Being a wheel base and not a steering wheel, it naturally doesn’t come with integrated paddle shifters and pedals since they will have to be purchased separately or bundled together.

What is the Fanatec Podium DD2 not so good at?

Although the Podium DD2 has got tons of great features, there are a couple of drawbacks that you should be aware of.

The first thing is that it may feel quite complicated to get the right settings for each specific game and console, therefore you might have to seek technical support every once in a while.

Finally the 1,499$ price tag isn’t quite as affordable as other entry-level Fanatec and Thrustmaster wheel bases, so it will be quite expensive.

Other than that, it should be clear to you by now that the Fanatec Podium DD2 is actually the best choice for anyone looking for an awesome wheel base at more of a premium price.

But don’t just take our word for it, let’s now get in depth with our review of the Fanatec Podium DD2!

The Fanatec Podium DD2 comes with an incredibly realistic and responsive force feedback which will make you feel every bumb and kerb on the track.

Not only that, in fact its unique 25Nm dynamic FFB system with 1000Hz update rate makes the steering feel smooth and realistic beyond expectations, unlocking the full performance of the direct drive motor.

Is the Fanatec Podium DD2 good for beginners?

That is really crucial since not everyone is a pro driver and finding the complete confidence to push the limits of the car further and further isn’t exactly an easy thing to do.

What games are compatible with the Fanatec Podium DD2?

The Fanatec Podium DD2 is compatible with most PC and Xbox racing games including iRacing, Assetto Corsa, rFactor 2 and Forza Horizon 5.

Some of the games compatible with the Podium DD2 are:

Is the Fanatec Podium DD2 easy to set up?

Yes, the Podium DD2 is actually pretty straightforward to setup as it doesn’t require any special drivers or software to install.

You’ll just need to connect it to your PC or console via USB and you’ll be ready to race after tweaking the tuning menu settings for optimum performance.

What steering and pedals are compatible with the Fanatec Podium DD2 wheel base?

Here’s the full list of compatible steering wheels with the Podium DD2 wheel base:

The Fanatec Podium DD2 comes with:

Can I use the Fanatec Podium DD2 on PS4 and PS5?

No, unfortunately the Podium DD2 wheel base is only compatible with PC and Xbox consoles.

For that reason you won’t stand a chance of getting it to work with PlayStation 4 and PlayStation 5.

Does the Fanatec Podium DD2 work on PC and Laptop?

Absolutely, the Podium DD2 works both on PC and Laptop with an operating system of Windows 7, 8, 10 and 11.

What are people saying about the Fanatec Podium DD2?

After doing some online research and analysis we’ve found that the general consensus for the Podium DD2 wheel base is really positive.

The most common comment was that the wheel base allows you to realistically feel the grip of the tyres and limit of the car which is really key for any advanced sim racing wheel base.

And regarding its premium price tag, people seem to think that it’s definetely worth it as long as you’re willing to invest in a top quality product that will last for years.

Will the Fanatec Podium DD2 make me faster?

You can check dozens of raving reviews online from people that have actually bought the Podium DD2 wheel base and have now improved their lap times by quite a chunk.

Of course you’ll also need to purchase a pro steering wheel and a set of good quality pedals to go with it which can be a bit pricey but totally worth it if you’re looking to be really competitive in sim racing.

The Fanatec Podium DD2 wheel base is currently being sold at a pretty high price of 1,499$ which makes it the most expensive, yet advanced wheel base in the market.

Despite that we’re confident to say that it’s worth every single penny as it will provide you with an unrivaled sim racing experience.

There is one main difference, The DD1 is cheaper than DD2, Same great performance for much less cost, however, the main difference resides in the peak torque the DD2 is Stronger than the DD1.

Where can I get the Fanatec Podium DD2?

You can only get the Podium F1 DD2 directly from the Fanatec official website and not from Amazon unfortunately.

Is the Fanatec Podium DD2 worth it?

So, is the Podium DD2 wheel base really worth buying?

The answer is definitely yes if you’re planning to take your sim racing skills to a whole new level despite its premium price.

We hope this article has been helpful in providing you with all the information you need to know about the Fanatec Podium DD2 wheel base.