For the females out there looking to make a name for themselves in the esports industry, Screen to Speed has come up with an amazing opportunity. The all-female competition will offer a $15,000 grand prize along with a trip to the live final in Las Vegas.

The competition is open to female gamers of all skill levels and from all nationalities.

In an effort to give a much needed boost to female sim racers, the first ever Screen to Speed iRacing competition is launching its tournament for women in esports!

It’s an incredible chance for these racers to shine against their peers, who are working tirelessly to prove themselves in the ever cutthroat industry of esports.

When will the registrations for the competition be opened?

Online registrations begin on 19th December 2022 and and females from all over the world are invited to participate.

That means you should probably give it a try if you’re into sim racing and want to compete against the best female racers out there.

Incepted by Init Esports founder Stefy Bau and Kellymoss Inc. co-owner Victoria Thomas, Screen to Speed by Pennzoil will be kind of a reality show that strives to discover female talent from esports and gaming communities as well as provide them a direct pathway into the motorsports industry for years to come.

Can you imagine what’s the current audience share of female esports racers? Just 3%.

Despite that, about 50% of worldwide gamers are women. That’s why the growth potential derived from new female racers is really attractive.

Thomas, owner of the 34-time national championship racing team Kellymoss expressed his enthusiasm for this project stating: “This project is a perfect match to our mission of bringing more women, and diversity as a whole, into motorsports: drivers, technicians, engineers, truckers and especially fans”.

“I’m hopeful that programs like ‘Screen to Speed’ may help to inspire the next generation of female leaders in motorsports and encourage them to dream big,” said Vice President of Shell Lubricants Marketing, Bree Sandlin.

What prizes can female racers win?

That’s the question that everyone wants to know.

With a massive grand prize of $15,000 awaiting the winner of this race, there are also a variety of additional rewards and prizes available to participants along their journey!

Where can I register for Screen to Speed?

Registration are now open and you can do that by following the Screen to Speed website and completing the form as in the screenshot below. 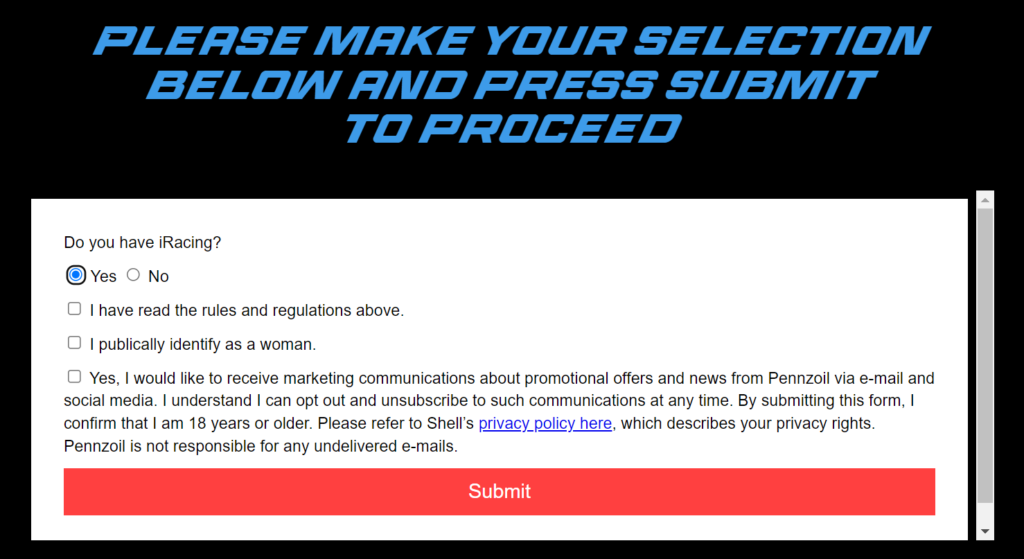 So there you have it, everything you needed to know about the Screen to Speed all-female esports competition.

This is a great chance for female racers out there to prove their worth and win some amazing prizes, including a $15,000 grand prize and an all-expenses paid trip to the live show in Las Vegas!

So what are you waiting for? Register now before it’s too late!