Since its December 2014 release, Kunos Simulazioni has worked so hard on delivering some of the best sim racing DLC packs in the history of sim racing.

Already in 2015 Assetto Corsa was able to release 3 new DLC packs called “Dream Packs 1, 2 & 3” and has since then kept the release schedule going with a DLC pack every 4 to 6 months.

In this guide we’ll show you what each DLC pack contains and how much it costs.

So having said that, let’s get started!

How many DLCs are there for Assetto Corsa?

As you can see, there is a good variety of DLC packs to choose from and so let’s now take a look at each one in a bit more detail.

We’re going to see the most recent DLC packs first and work our way backwards to the “oldest” ones. So the latest DLC pack released has been the Ferrari 70th Anniversary Pack which was released in September 2017.

This DLC celebrates Ferrari’s 70th Anniversary and as such it comes with the F1 race-winning Ferarri SF70H car. That will give you the chance to experience how the Ferrari team raced back in the 2017 Formula One season.

The DLC costs $6.99 on Steam and as such we would recommend it to those Ferrari fans. 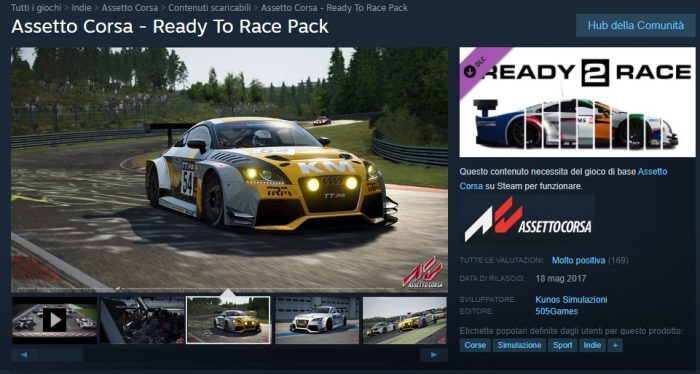 The second last DLC release by Assetto Corsa has been the Ready To Race pack which came out in May 2017.

This DLC is a great one for those who love GT3s since it features 10 new cars including Audi, Lotus, McLaren, Maserati and Toyota which have all been specifically designed to race at high performance. 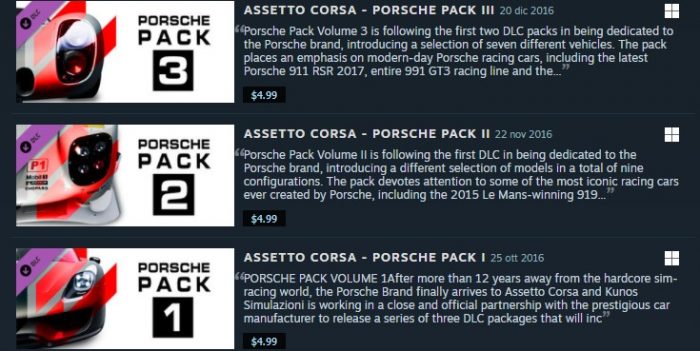 These 3 Porsche DLC packs have been released by the end of 2016 and have been some of the most popular DLC packs to date.

The Porsche packs come with a good variety of cars such as the Porsche 911 GT3 as well as the LMP1 Porsche 919 Hybrid.

These DLCs are great for those who love Porsche cars and want to experience the most spectacular GT race tracks with them. 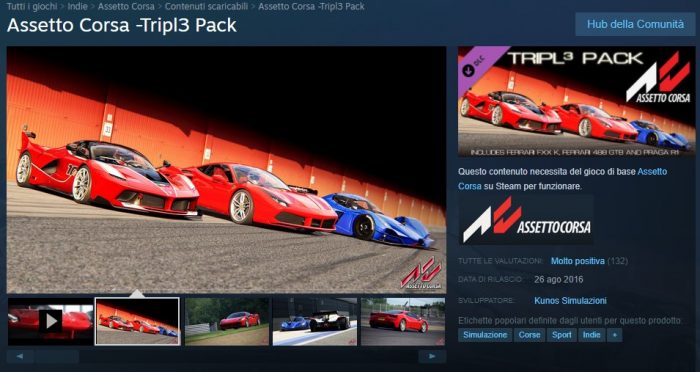 The Tripl3 pack is a DLC that was released in December 2016 and it contains 6 new cars.

It’s the cheapest DLC selling for just $1.99 and I’d say it is a great starting DLC for those who are new to Assetto Corsa.

You’ll be able to drive the legendary Praga R1 and the Powerful Ferrari 488 GTB as well as the Ferrari FXX K. These cars are real beasts and will definitely put your driving skills to the test.

Released in July 2016, the Red Pack features some of the most legendary italian sports cars including Ferarri, Maserati and Alfa Romeo.

Not only that, but through this DLC you’ll also get to race on the very popular Austrian Red Bull Ring circuit. 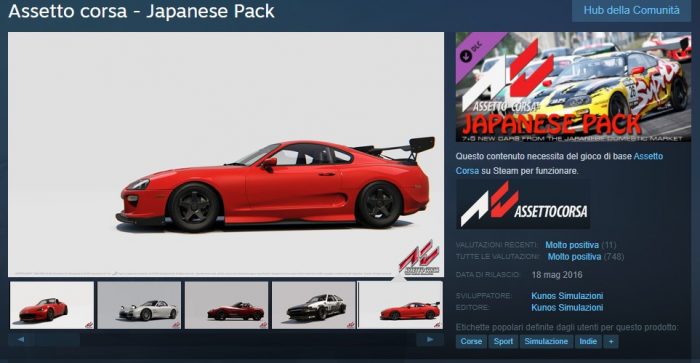 If you feel like you need a change of scenery, the Japanese Pack DLC is perfect for you.

Released back in May 2016, the Japanese DLC features 7 new Japanese cars and 12 tracks.

Those include Suzuka, Fuji, Toyota and Honda.

This DLC is also on of the most affordable selling at just $2.99 making it a great deal for Japanese sim racers. 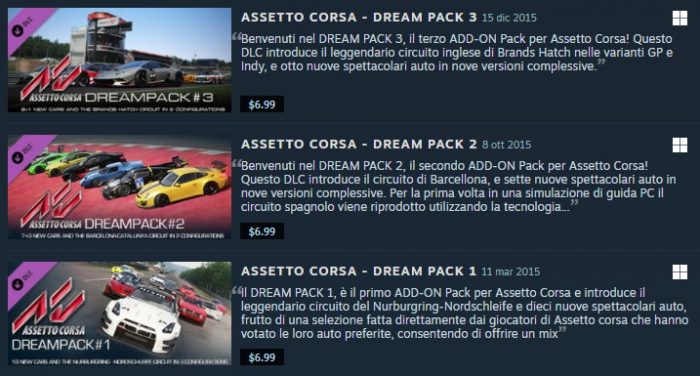 Released in 2015, the Dream Packs are a series of DLCs that feature some of the best cars and tracks in the world and that’s probably why are called the “Dream Packs”.

The Dream Packs allows you to unlock some of the most legendary European circuits including the Nordschleife, Brands Hatch and Barcelona.

Each of these DLCs also come with a good variety of cars such as the McLaren P1 and the Audi R8.

So there you have it, a detailed look at all the DLCs that are available for Assetto Corsa.

We hope this has helped you in making a decision of which DLC to buy next.

If you’re still undecided, then we would recommend the Ferrari 70th Anniversary Pack or the Ready To Race pack as they are more of a PRO type of DLCs including modern high-performing cars.

The best ACC DLC is probably the Ferarri 70th Anniversary Pack since it allows you to race with the very popular SF70H Ferarri F1 car. That car is so much fun to drive since it’s really realistic and feels fast and agile.

If you’re looking for other great DLCs, check out the Porsche Packs which come with some amazing Porsche cars and tracks in history including the 911 GT3 and the LMP1 Porsche 919 Hybrid.

What is Assetto Corsa DLC?

Assetto Corsa DLC stands for “downloadable content” and refers to any additional content that can be bought as an addition to the standard Assetto Corsa package.

Does Assetto Corsa have DLC?

Yes, it does. Assetto Corsa has got 11 DLCs in total as of the time of writing this article.

Does Assetto Corsa Ultimate Edition have all DLCs?

It’s sold for only $39.99 on Steam which makes it nearly 50% cheaper than buying all of the 11 Assetto Corsa DLCs combined.

How much do ACC DLC packs cost?

The DLC packs for Assetto Corsa vary in price, but the cheapest ones are $1.99 and the most expensive ones cost $6.99.

If you were to purchase all 11 packs together it would cost you around $60.