Looking to get really fast and win all those race in Mario kart 8 deluxe?

Then make sure you follow our guide as you’ll need to put together the best combination of driver, vehicle and glider in order to be the fastest.

You’ll be able to design the most performing kart in Mario Kart 8 Deluxe and easily outperform your friends who are still just selecting parts at random. 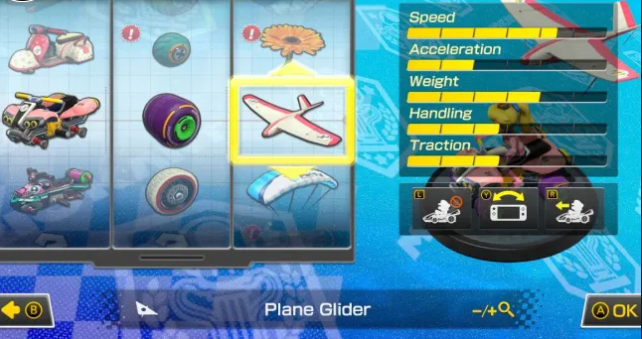 Therefore, we’ll be taking a look at some of the best all-around combinations that can be used to win most races.

Character Classes are one of the key factors in your racing performance in Mario Kart 8.

All the characters are split into Light (Toad and others), Medium (Mario, Peach, and similar), and Heavy (Bowser, DK, and similar ones).

Things are slightly more complicated than that, with Light and Medium having two classes each while Heavy has got three.

What’s the characters’ weight all about?

Light characters accelerate quickly but have a fairly low top speed, and they get easily knocked around.

Heavy characters are slow to start moving but can reach high speeds, and they’re really tough to beat while racing.

Finally medium charachters have a mix of both light and heavy attributes and end up being average in both respects.

The sub class each character falls into will determine exactly how all the stats are arranged, but the general make up is about the same.

Things to try when getting start

When you’re initially getting started in Mario Kart 8, try out a few different options to see which one you like the most.

However, if you wish to set top times in Time Trial or compete with the best in Grand Prix events, you’ll need to build the greatest kart and character combinations to end on top.

What are the best Mario Kart 8 Deluxe Character Kart Combo?

It’s a very subjective mix of elements, with the performance you get depending on how much you enjoy the feeling of the configuration.

Some people prefer a kart with fast acceleration so that they don’t feel as if they’re losing too much time after getting hit or spinning around, while others prefer to bet on higher top speeds and rely on evasive maneuvres to avoid being slowed down.

We believe we have found an excellent option in Mario Kart 8 Deluxe that is definitely worth trying.

With this kart setup, you can reach some really high speeds without compromising grip too much or robustness.

However, If you’re looking to trade some traction for a faster time, you could go for a build with less traction.

Though we wouldn’t recommend doing this unless you’re sticking to Time Trial events.

There you have it, our tips and recommandations for building the best kart combination possible in Mario Kart 8 Deluxe.

Of course, this is just one of the ways you could go about it and your results may vary depending on how you like to race.

What’s important is that you experiment with different setups until you find a combination that feels just right for you.