Looking to race in virtual reality for the first time?

This guide will help you find the right VR headset for sim racing.

Virtual reality has been around for a while, but it’s only recently managed to break into the mainstream with products like Oculus Rift and HTC Vive .

There are a few different VR headsets on the market these days, and it can be tough to decide which one is the best for sim racing. 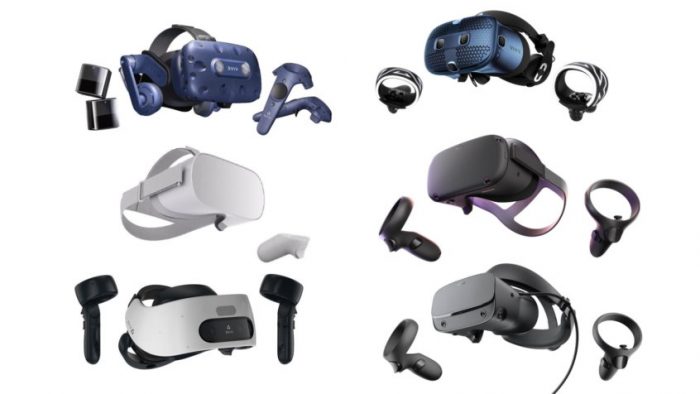 In this post, we’ll take a look at five of the most popular VR headsets and break down what makes them great for sim racing.

Whether you’re looking for high-end performance or an affordable option, we’ve got you covered!

So without further ado, let’s get started!

Here’s the list of VR headsets we’re gonna cover in this guide:

All of these might be already be familiar to you, and we’re later going to break down each one of them.

But first let’s answer some of the most frequently asked question about using virtual reality for sim racing.

Which VR is best for sim racing?

Our 5 best VR headsets for sim racing are:

Each headset has its own advantages and disadvantages, so it’s important to choose the one that best suits your needs.

If you’re looking for a high-end VR headset with excellent performance, the Valve Index is the best option.

If you’re looking for a more affordable VR headset, the Oculus Rift S is a good choice.

And if you’re looking for a VR headset with a wide field of view, the Samsung HMD Odyssey+ is a great option.

Is a VR headset worth it for sim racing?

It’s no secret that virtual reality can augment the gaming experience, and sim racing is no exception.

VR headsets provide an immersive experience that puts you right in the driver’s seat, and this can be a huge advantage for competitive sim racers.

That said, not everyone needs a VR headset to enjoy sim racing.

If you’re just looking to race for fun or practice on your own, you might not need a VR headset.

What’s the difference between virtual reality and augmented reality?

Virtual reality completely immerses your vision in a digital world while augmented reality only partially enhances your vision with computer-generated content.

For example, Google Glass is an AR device that displays information on the screen while you’re looking through the lens.

VR headsets, on the other hand, completely block out your surroundings and put you in a digital world.

Is Sim Racing easier in VR?

On the other hand, sim racing in VR is much more challenging because it takes time to get used to the controls.

Ultimately, it depends on your preferences and what you’re hoping to gain from VR but one thing is sure: VR headsets can definitely make sim racing more more immersive and realistic.

Keep the above points in mind as we take a closer look at our five best VR headsets in this guide.

Is VR better for iRacing?

As you might know iRacing is compatible with the most popular VR headsets and provides an excellent experience in virtual reality.

iRacing is even adding support for Valve Index and we can’t wait to see how it goes.

If you’ve never played on iRacing in virtual reality, you’re in for a treat!

Despite being more challenging at first, iRacing in a VR headset can be very rewarding by having a bbetter car handling and feeling the grip from the track as well as having great overtakes.

How do I start VR with iRacing?

To get virtual reality started on iRacing you’ll simply need to get a VR headset and then go into the display settings.

From there, select your VR headset as your type of device to use.

Don’t forget to also check the “Enable VR” box to make sure that iRacing launches in virtual reality mode.

If you’re using an Oculus Rift you’ll need to run it in extended mode, which requires a second monitor.

Also, the resolution you use might also affect your VR performance so make sure to check your VR settings and change them as needed.

How long can you race in VR?

As previously mentioned, we recommend that you avoid extended use of VR headsets in order to prevent any possible negative impact on your eyesight.

That said, the actual limit will depend on how comfortable you feel and on the type of VR headset you’re using but please make sure you stick to that.

Is VR bad for your eyes?

If you’re worried about VR affecting your eyesight the only thing recommended is to avoid playing too much during a given day. One hour max a day would probably be a good rule of thumb.

Virtual reality is till at its early days and further research is required to understand how extended use could affect our long term eyesight.

In the meantime, VR headsets manufacturers provide a warning that an overly extended use of VR headsets could affect your vision so please bear that in mind.

Is VR the future of sim racing?

It’s hard to say for certain but it definitely seems that virtual reality is going to be the future of sim racing and esports in general.

As mentioned earlier, VR headsets add a lot of immersion and realism to sim racing.

It might take some time for everyone to get used to VR headsets but we can’t see how it can’t become the norm in a few years.

The Formula 1 2021 game indeed supports virtual reality and it provides a great experience if you’re looking to get into VR and extend your sim racing sills.

If you’re looking to get into VR gaming, Formula 1 2021 as well iRacing and Assetto Corsa are a great place to start.

Alright so let’s now get in depth with our guide about the best VR headsets in the market right now.

The Valve Index is probably considered as the best VR headset for a premium experience on a gaming PC as it provides a great balance between price, performance and quality.

The headset comes with integrated headphones for a more immersive experience and the motion controllers are some of the best we’ve tried.

Despite the expensive price tag, we really believe that Valve Index is a solid investment and one of the best headsets for iRacing.

The second best VR headset on the market right now would probably have to be HTC Vive Pro 2.

It’s not as good as Valve Index but it does come with some great features for a lower price.

The headset comes with integrated headphones and Vive Pro has some of the most accurate room-scale tracking thanks to the two base stations that are included.

The controllers are also very comfortable and precise.

For sim racing, the HTC Vive Pro works really well thanks to the added immersion that will give you a realistic feeling while driving.

Next on the list comes the very well known Oculus Rift S.

This headset is much more affordable than the HTC Vive Pro and Valve index but it doesn’t unfortunately come with integrated headphones.

Despite that this headset is still a suitable choice for VR gaming and it also works really well with sim racing.

Oculus Rift S comes with integrated sensors that do provide a similar room-scale tracking as the HTC Vive Pro.

The controllers are also comfortable and precise enough to provide an immersive experience while driving a car.

The Samsung HMD Odyssey+ is definitely one of the best options out there if you’re looking for an affordable VR headset.

It provides tons of immersion as well as a pretty good tracking experience if you have enough space in your room.

The headset comes with integrated headphones as well as accurate motion controllers.

It comes in an elegantly black color scheme and it is one of the most popular VR headsets on the market due to its high overall quality.

This option is therefore very popular among budget-conscious sim racers that want to experience VR without spending a fortune.

Next we’ve got the HP Reverb which is another great VR headset for sim racing.

This headset provides a comfortable design similar to other products on this list along with accurate motion controllers.

The platform it runs on is Windows and has got a field of view of 114 degrees.

With this headset, you also get a good 4K stereo camera which will be perfect if you want to record your sim racing sessions.

The final option on our list is Sony PlayStation VR and it’s probably the most popular choice if you’re looking for a headset to play sim racing games on console.

The headset requires a PlayStation 4 to run and it does provide an immersive experience for sim racing games.

It also has an in built 3D audio system which gives you an extra level of immersion while racing.

One downside would be that the headset doesn’t have the best resolution and it can be quite uncomfortable to wear for long periods of time compared to other more comfortable options.

But at its current price, it’s still a great choice for people who are looking to get into VR gaming and sim racing.

Time to wrap up

That’s it for our list of the best VR headsets for sim racing!

We hope you found this article helpful and that it has given you a good idea of what headset to buy for your needs.

All of these headsets are really top quality so it really comes down to your budget, whether or not you need integrated headphones and how much room-scale VR you’re looking for.

Remember that some of these products require you to have a compatible VR ready PC or console in order to run, so make sure you do your research before buying.

So hopefully this article has given you a good idea of what to buy if you’re interested in sim racing and VR gaming!