Being a sim racing driver, you know that having the best possible setup is crucial to getting those fast laps in.

There’s recently been a lot of debate in the sim racing community about whether is better VR or monitors.

Some people swear by VR, while others think monitors are the only way to go. So which is really better? 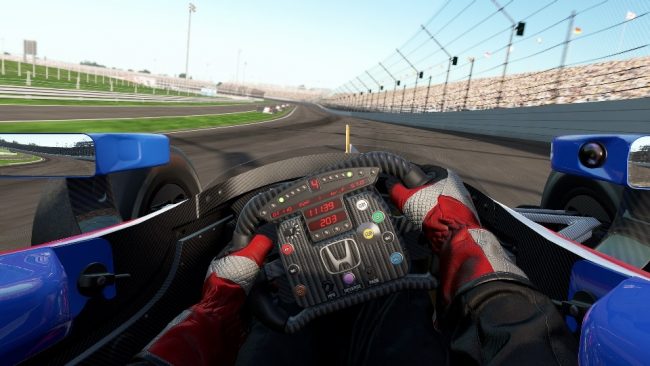 Let’s take a look at the pros and cons of both options and see which comes out on top.

Spoiler alert: whether using VR or an actual monitor comes down to preference, though most sim racers tend to prefer the monitor option (triple screens especially) as they feel like it performs better overall.

Having said that, let’s take a look at the pros and cons of each to see which is best for you.

We’re gonna go through some of the major aspects that influence this heavily debated decision including:

So let’s have a look into each of these points starting from the major one: price.

What’s most affordable: VR or monitors?

One of the main reasons VR has been catching on lately is because the headsets are quite a bit more affordable than high-end monitors in most cases.

With that being said, there are many different types and prices of both monitors and VR headsets out there.

The least expensive option would be to go for a VR headset like the Oculus Go, which starts at $199 though be aware that other headsets like the HTC Vive will be costing you even up to $900.

If you want to go for a high-end monitor, something like the Samsung Odyssey G9 will cost up to $1,900, so again not very affordable.

Generally speaking though, even if you wanted to use a VR headset, most sim racers would still want to have a monitor as well to use as a reference point.

This is where it gets a little tricky as it’s not easy to compare the two side by side.

On one hand, monitors have a higher resolution than most VR headsets and so you can see more details. However, on the other hand, VR headsets have a much wider field of view (FOV), which can give you an immersive feeling that monitors can’t quite match. 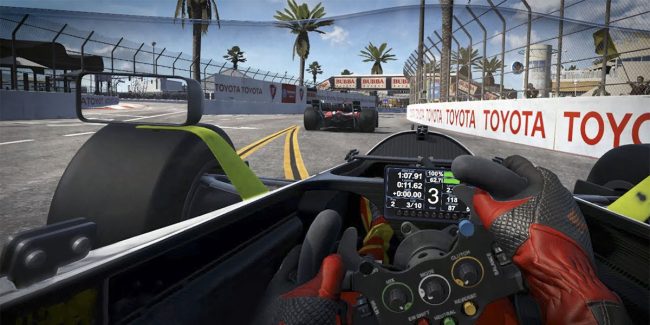 It really comes down to what you’re looking for and what you consider important.

Some people might prefer the higher resolution of monitors, while others might find the wider FOV of VR headsets more important.

When it comes to FOV and realism, there’s no doubt that VR headsets are the clear winner.

The wider FOV that VR headsets offer can give you a much more immersive feeling and make it feel like you’re actually in the race car.

This is one of the main reasons why many sim racers prefer VR headsets over monitors. 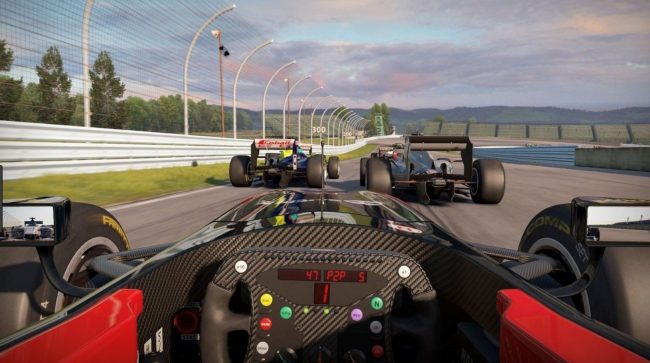 However, not VR headsets are created equal and some have a narrower FOV than others.

The Oculus Go for example, has a narrower FOV and lower resolution than the HTC Vive for example.

So if you’re looking for the most immersive experience, you could get a VR headset with a wide FOV.

Though make sure that the FPS are high enough to guarantee flawless driving.

That’s because Steam VR usually has a limited number of headsets that it’s compatible with.

These include the Oculus Rift, The HTC Vive, the Windows Mixed Reality headsets and the Valve Index.

If you don’t have one of those headsets, you might not be able to use SteamVR games.

This also includes many of the popular sim racing games like iRacing, Assetto Corsa, ACC, RAceroom, and rFactor 2.

On the other hand, monitors are much more device compatible as all you need is an HDMI port to connect it to your PC.

You can use pretty much any type of monitor you want, from a cheap one to an ultrawide or even a triple screen setup.

One small advantage of VR headsets is that they don’t require as much space as monitors.

This is because you can use them while sitting down, which is great if you don’t have a lot of space in your room.

So if you’ve got a limited amount of space, VR headsets could be a better option for you.

This one is a bit tricky to compare as it depends on the driver as beginners usually tend to struggle way more to set up their graphics settings properly.

Some people might find VR headsets easier to use because you don’t have to switch between programs or alt-tab out of games.

All you need to do is put on the headset and you’re good to go.

However, monitors are generally considered to be easier to use as all you need to do is plug in the HDMI cable and you’re ready to go.

There’s no need to fiddle with settings or calibrate anything.

If you just care about improving your lap time performance and winning online races then monitors would 100% be the way to go.

That’s because VR headsets can have a negative impact on your driving performance as they can cause a bit of motion sickness in some people.

This is because you’re moving around in a virtual world and your brain isn’t sure if you’re actually moving or not.

Moreover, unless your PC is extremely powerful, you’ll struggle massively to get high FPS and reduce lags during your online races.

This is because sim racing games are extremely demanding and require a lot of processing power.

So which one should you go for: VR or monitors?

As we’ve seen, it really depends on what you’re looking to use them for.

If you’re computer’s CPU and GPU are really powerful and you just want to have some fun and don’t really care about racing competitively online, then VR headsets may be worth trying.

However, if you’re looking to improve your lap time performance and win online races, then monitors would be the way to go thanks to the increased stability and fps.

Hope this article helped you get some context for your decision.