Looking for the best Nascar game to play between Ignition and NH5?

Both games offer some of the most realistic and immersive NASCAR driving experiences, but which one is better?

Nascar Heat 5 has been praised for its improved graphics and physics engine, giving players a more realistic experience.

However, some players have found the career mode to be overly simplistic.

Nascar 21 Ignition, on the other hand, offers a more in-depth career mode, allowing players to start their own team and manage their finances.

So having said that let’s now have an in-depth comparison between the two.

One extra year of development may not seem like much, but it can make a big difference in the quality of a game as NASCAR ignition game developers have worked hard to bring some great new features and improvements.

NH5 seems cheaper but with all the extra DLCs released, the price quickly adds up to nearly $100 if you wished to buy them all.

In terms of graphics, both games look great with detailed car models and well-designed tracks.

However, Heat 5’s graphics look marginally better and the game runs at a smoother framerate. 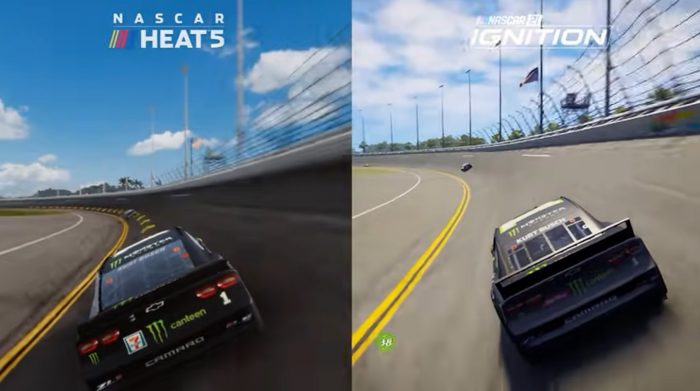 The physics engine is where Heat 5 really shines as it gives the cars a more realistic handling and feedback from them.

This makes the racing more enjoyable as you have to be more careful with your braking and acceleration.

However, Nascar 21 Ignition is also a great game in this department and it’s not that far behind Heat 5.

In terms of realism, NH5 has got the upper hand. 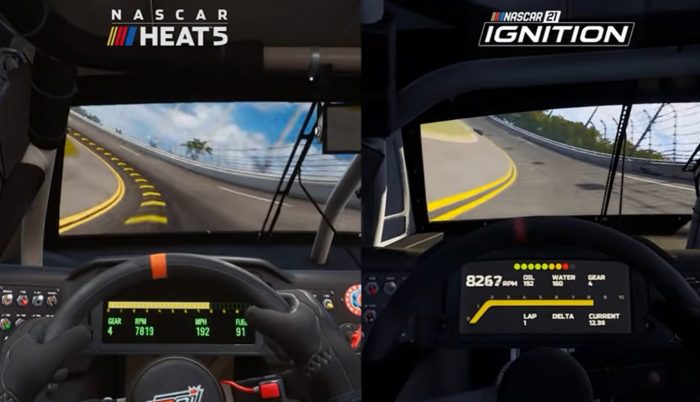 Nascar 21 Ignition does a great job of replicating the experience of driving a NASCAR car but it’s not quite as accurate as Heat 5.

In terms of cars and tracks, they’re both pretty similar since they equally feature the Cup series cars as well as the Xfinity ones.

They also have the NASCAR Truck series which is great news for Truck fans out there.

All the ovals and road tracks are available in both games with the exception of the Charlotte Roval which is only available in NH5. 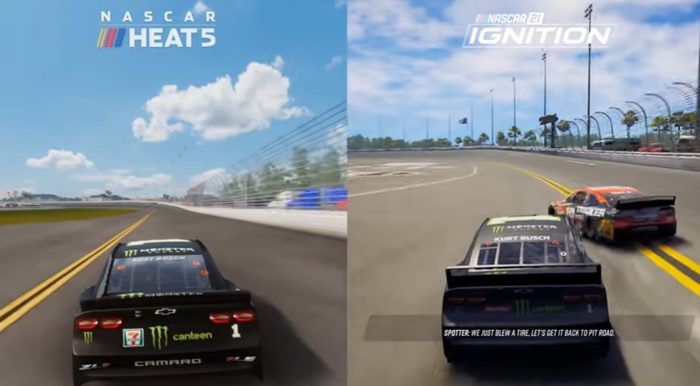 If you then wished to purchase additional DLCs from both games you will end up with way more content on NH5 as it features the 2020 season’s pass and monthly DLC updates.

Regarding online races, NH5 allows a maximum of 40 players as well as Ignition 21.

There are no major differences from this point of view so it will all come down to personal preference.

Nascar Heat 5 may have been released a year earlier but it’s still better than it’s closest competitor, Nascar Ignition 21. That’s because NH5 has better graphics, a more realistic physics engine as well as more content overall.

In addition to that, it’s also slightly cheaper than Nascar 21 Ignition, making it the better value-for-money game as of April 2022.

So if you’re looking for the best NASCAR game to play, Nascar Heat 5 is the clear winner.

There’s still a big debate about that and opinions may change in the near future as Nascar 21 Ignition is planning to release some major DLC updates that could improve the game significantly.

We will have to wait and see how things develop in the future.

Hope that was helpful, good luck with your racing 🙂