When you’re looking for the best racing simulator, there are a few things you want to take into account.

You need a realistic experience with great graphics, and you also want a selection of cars and tracks to race on.

Assetto Corsa Competizione is one of the newer snd most advanced simulators on the market, and it’s been making a lot of waves in the community.

But is it really better than Forza Motorsport 7? Let’s take a closer look.

In this blog article, I’ll compare and contrast these two amazing racing games. 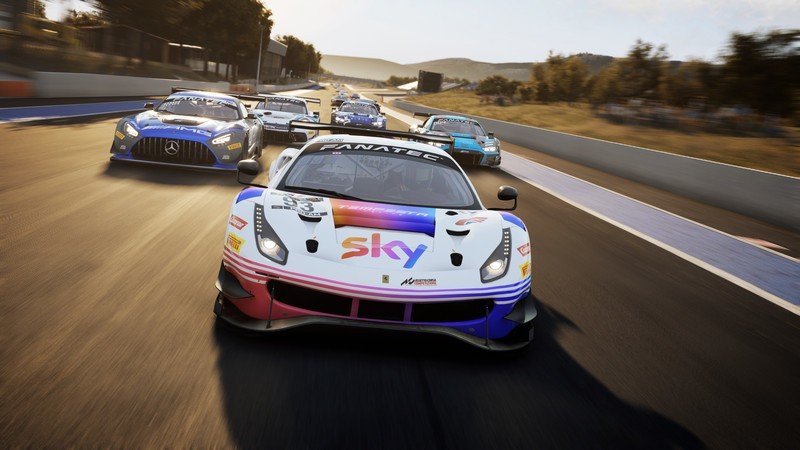 Assetto Corsa Competizione was released in September 2018 and has enjoyed a lot of success ever since.

Hundreds of thousands of sim racers have downloaded it and still race on it which proves to be one of the most popular racing simulators available today.

It’s in fact quickly become one of the most sought-after racing simulators out there, and for good reason too.

First of all, the graphics are phenomenal.

The cars, the tracks and the overall environments look really realistic and feel also very realistic to drive.

The attention to details while developing this game from Kunos Simulazioni is very impressive.

Forza 7 is a direct sequel to the extremely successful Forza Motorsport 6.

It was released in October 2017 and quickly got some traction among its users.

It had a huge amount of interest following its release date with a peak of weekly Google searches of 110k!

It’s been downloaded by thousands of sim racers and has been used for all kinds of racing series since it hit the market.

In terms of cars and tracks selection, Forza 7 destroys ACC!

In fact FM7 has delivered an incredible amount of cars with 700 and 32 tracks which makes it the racing game with probably the highest number of cars and circuits ever developed.

However, the level of sophistication of the circuits is not as developed as in Assetto Corsa Competizione.

ACC has only got 13 GT3 cars and 11 GT4 cars though the quality of each of them is absolutely amazing!

The cars are extremely close to their real-life counterparts.

As for the tracks, ACC delivers 16 different circuits including phenomenal tracks like Bathurst, Laguna Seca, Spa and Silverstone!

You certainly can’t be disappointed by the cars and tracks offered in Assetto Corsa Competizione.

They’re all laser scanned to the millimeter which is something you really want to try.

Even though ACC is only a year “younger” than Forza Motorsport 7, the graphics feel a lot more realistic and have been developed even further.

ACC is more focused on allowing players to feel like they’re in a real race car rather than Forza Motorsport 7 that’s more of an Arcade open-world game.

The sound effects are also much more realistic in ACC in my opinion.

Forza Motorsport 7’s sounds are more like computer-generated sounds, while ACC’s are more of a realistic racing GT3 car.

Okay so in terms of the realism and level of immersion Assetto Corsa Competizione is the clear winner.

While FM7 could be more of an arcade game where you can press the brake when you’re in a turn, in ACC all of your skills are really tested through each track.

Drivers also need to be very precise with their steering, accelerating and brakes which is something you don’t see in many other games including Forza 7.

Only iRacing can hold to that in my opinion.

This level of driving realism is truly something that has to be tried to be understood, you really should try it for yourself.

Is ACC Better than Forza 7?

So here’s the big question: Is ACC better than Forza 7?

Honestly, I’m probably biased towards ACC as it’s the game I’m currently playing and as such, more familiar with.

Forza Motorsport 7 is definitely a great racing simulator though.

The only thing that leans more towards ACC is the level of driving realism and immersion.

Assetto Corsa Competizione will ake you feel like you’re in a real GT3 car and that’s what most sim racers are looking for.

So if you’re up for a bit of realism in your racing simulator, Assetto Corsa Competizione is the way to go!

You obviously have to experience it for yourself, but you won’t be disappointed.

As always, I hope you enjoyed this post, and I’ll see you next time!