The world of sim racing is evolving day after day and in order for you to stay on top of the game you’ll need to have the best racing equipment.

Gone are the days where you could think to win by using a joystick.

So you’re considering to buy a steering wheel to race on Xbox one and were wondering which one is the best for toy based on prices and features.

Well, you’re at the right place.

In this article, I will guide you through the top 5 racing wheels for Xbox One available nowadays.

The list is based on prices and features as well as from real life sim racing experience.

We’ve tried yo be as transparent as possible and did our best to remain unbiased.

Here’s the list of the 5 best racing wheels for Xbox one:

The first steering wheel on the list is the Logitech G923.

The reason why it’s the first on the list is that out of all the racing wheels available on Xbox One, this one has probablygot to be my personal favorite in terms of value for money!

I won’t lie to you, this steering wheel is not expensive at all and you’re getting features that makes it worth every penny you spend on it.

The wheel itself is covered with quality materials and the grips are really comfy.

Not only does it look awesome with its sharp edges and cool led colors but also performs like a beast!

The FFB is really strong on this one and the wheel has a good range of rotation.

It’s also worth noting that you can use this steering wheel on PC without any issues!

It also allows you adjust your steering sensitivy and frce feedback strength which is a huge plus for all us sim racers.

Actually the steering wheel is compatible also with Xbox One, PC, PS4 and even Playstation 5!

You can purchase the steering wheel directly on Amazon and you can check it’s current prices here.

Overall, the Logitech G923 is an amazing steering wheel for its price and I sincerely recommend it!

This is probably is the second most affordable racing wheel from Thrustmaster and although it’s a bit underpowered in comparison to other racing wheels, I can say that it does a great job for its price.

The wheel itself feels solid and comfortable to hold thanks to its rubber grips which you’ll notice especially during long races!

The great thing is that it also comes bundled together with a set of pedals!

Its FFB is not the best one but considering the low price of this wheel, it’s pretty decent.

It should be noted that you can control how strong your force feedback is with its in-built preasure knob which I think is quite great!

Though if you’re a beginner sim racer it should be more than enough to get started.

The Thrustermaster TMX is compatible only with Xbox One and PC and not for Playstation unfortunately.

If you were looking for the best steering wheels for PS5 then check this other article where we cover the best ones for Playstation from start to finish.

You can purchase it from Amazon and you can check its current prices here.

This racing wheel is so popular that it tends to run out of stock so make sure you hurry up! 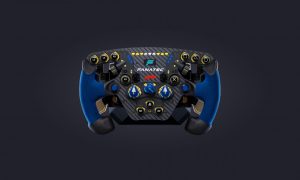 This steering wheel is incredible guys.

Though it costs a furtune the sense of immersion you’ll get by driving with this is just insane.

It comes at $1799 though it’s as good as it can be in terms of force feedback and driving precision.

Fanatec’s always been delivering great stuff and with the Podium F1 wheel they’ve done it again.

The FFB from this wheel is simply amazing and it’s one of the most immersive feeling steering wheels I’ve ever tried.

With that price fortunately the FFB is included and so you’ll be ready to get racing in no time once you’ll unbox it.

The great thing is that it’s compatible not only with Xbox oone, but also with Playstation(PS4, not sure about PS5) and PC.

That’s great since it gives you the opportunity to use it on whatever platform you want!

The Podium F1 Wheel is available at the official Fanatec Website.

You can check its current prices and availability here.

Just be prepared that it might take a while to ship since they have a very limited stock.

All in all this steering wheel is perhaps my favorite despite its high price tag.

The G920 from Logitech is a great steering wheel for anyone looking to get into sim racing on a budget.

It’s got great in build features as well as top quality construction.

Moreover it comes bundled with a Logitech set of pedals and so that is definetely a plus.

You can also ckeck our in depth review of the G920 here.

Its Force feedback is not as good as the ones found in more expensive wheels such as the Podium F1 from Fanatec but it’s still pretty good.

Remember though that you can always adjust it to your taste from the settings.

Actually the Logitech G920 is compatibile with Xbox one, Xbox X, Xbox S, Pc and Mac

You can purchase it from the Logitech website or directly from Amazon if you prefer.

Here you can check its current price on Amazon.

Last but not least we’ve got the Ferrari Thrustmaster’s steering wheel.

This is a great wheel for beginners on a budget as it comes at a very affordable price.

It’s surely not as good as more expensive wheels but it does the job just fine.

It’s a great place to start if you’re looking to get into sim racing for the first time without wanting to spend a fortune.

It costs nearly 10x less than the Fanatec’s Podium F1 though it still does the job.

If you’re budget is limited then this steering wheel will do awesome things for you.

Its FFB is not the most impressive on the list though it provides a realistic experience anyways.

It’s not as precise and “strong” as the Fanatec’s but it still does a great job for the price that it’s currently being sold.

The Thrustmaster Ferrari is compatibile both with Xbox One and PC.

You can purchase it either from Amazon or the Thrustmaster’s official Website.

Here you can check its current price on Amazon.

So there you go, I believe these are the 5 best steering wheels for Xbox one right now in the market.

Each of them has its own good and bad points but I’m sure that there’s one that will fit your needs just perfect.

If you’re looking for the best possible experience then go with the Fanatec Podium F1 wheel as it’s simply amazing.

On the other hand if your budget is limited then the Thrustmaster Ferrari or the Logitecg G920 will work just fine for you.

I hope that my article managed to help you out!

Until next time, have fun and good luck on the tracks guys! 🙂