How To Set up Triple Monitors for Sim Racing

If you’re a serious sim racer, then you know that having multiple monitors is a must for leveling up your on track performance.

With so much real estate on screen, you can see everything that’s happening on track and make changes to your driving strategy accordingly.

In this blog post, we’ll show you how to set up triple monitors for sim racing.

By following these simple steps, you’ll be up and racing in no time!

So, whether you’re a beginner or an experienced sim racer, keep reading to learn more. 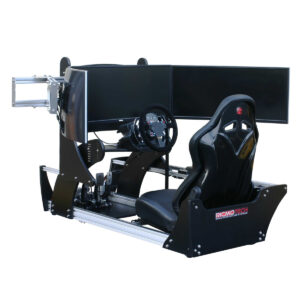 What are triple monitors in sim racing?

First of all, let’s start by defining what triple monitors in sim racing are even though it might pretty self explanatory.

Typically, having two screens attached to your computer is called dual monitor setup.

Having three screens adds another dimension and makes it a triple monitor setup.

Why use triple monitors for sim racing?

If you’ve been sim racing for a while, then chances are that you know the benefits of having multiple screens.  With triple monitors in sim racing, it means you will have 3 times more space than single monitor setup and be able to see in three dimensions and react accordingly.

For most people, the addition of their third screen will be life changing! The benefits are so numerous that it’s impossible to list them all in this single post.

That’s because your field of view will be bigger as well as your perception of depth.

Taking all that into account, you should expect to improve your lap times in no time.

But in case that’s not enough for you, there are several resources where you can learn more about the benefits of triple monitor setups (such as this Reddit post).

What is the best screen size for sim racing?

27 to 32-inch monitors are the best for triple screen setups in sim racing.

Regarding screen size, there are 3 main factors that you should take into account that will determine your FOV (field of view):

Regarding distance, it’s pretty easy to understand that the further away you are from your screens, the smaller they will appear.

That’s why, for sim racing, it’s best to have a setup where you are as pretty close to the screens as it will give you better perception and ultimately more performance.

In terms of resolution, the higher the resolution of your screens, the better.

But that doesn’t mean that you need the most recent and expensive models on the market.

Can I run a triple monitor setup?

In order for you to run a triple monitor setup, you will need a graphics card that supports three monitors as well as a DisplayPort.

If your graphics card doesn’t support three monitors, you can still use two screens and create a dual monitor setup though it won’t be as nice and realistic as having three monitors.

So make sure your PC’s graphic card is powerful enough to support three monitors otherwise you can consider upgrading it.

How do I connect multiple monitors?

There are different ways to connect multiple monitors to your computer.

The most popular way is by using a DisplayPort which can support up to 4 monitors.

Another way is by using an HDMI cable though it often times will only support 2 screens.

In case you’re having trouble connecting your monitors, you can check out this comprehensive guide on how to do it.

Not all sim racing games support triple monitors, but most games released in the last few years do.

In order for the game to take advantage of three monitors, it needs to support Nvidia Surround or AMD Eyefinity.

Here’s a list of sim racing games that we know for a fact that support triple screen monitors:

Bear in mind that all the F1 series games including F1 2021 and F1 2020 do not support triple screens at the moment.

Is 3 monitors too much?

Some people might think that having three monitors is too much, but the truth is that it really depends on your needs and preferences.

Some gamers only use two screens while others might use three or more screens.

What I personally think is that you will have such an incredible experience racing with three monitors that no other piece of hardware can match.

The important thing is that you find what’s best for you and don’t be afraid to experiment with different setups.

What are the best triple screen monitor stands?

The best triple screen supports are ones that help you to change the angle of your monitors easily because this will allow you to find the best possible position for each one.

You will be able to move it up or down, left and right without too much effort.

Having said that, check our this other guide for some of the best budget friendly triple screen monitors stands to buy on Amazon.

Having a triple monitor setup is the best way to get the most immersive experience when racing.

Make sure your PC’s graphic card is powerful enough to support three monitors otherwise you can consider upgrading it.

Some people might think that having three monitors is too much, but the truth is that it really does provide an astonishing racing experience.

The best triple screen monitor stands are ones that help you to change the angle of your monitors easily.

So have you decided yet which type of monitor stand do you need?