With the release of f1 2021, there has been a lot of discussion about how it compares to other popular sim racing games including iRacing.

In this blog post, we’ll take a look at the F1 2021 game vs the F1 version from iRacing, and see how they stack up against each other.

We’ll also discuss which one is better for different types of sim racing drivers. 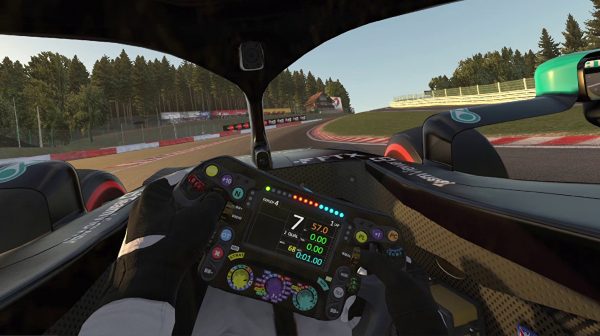 So if you’re wondering which game to get into next, read on!

We’re first going to have a look at each one separately and then we will dive into the actual comparison.

F1 2021 is the latest game in the official Formula One video game series from Codemasters.

The game was released on July 13th, 2021, and features all of the teams, drivers, and circuits from the 2021 Formula One World Championship.

F1 2021 also introduces a new Career mode, as well as a new “E-Sports” mode where players can compete against each other online.

iRacing is a very popular online-only sim racing game that was released back in August 2008.

The game features realistic physics and graphics, and has a large and active online community.

Can you drive F1 in iRacing?

Yes, you can drive the Mercedes-AMG W12 F1 car in iRacing. That may not be as rewarding as opting from 10 different cars on F1 2021, but it’s actually really worth driving with it as it’s considered far superior in terms of physics and realism.

According to most pro sim drivers, iRacing is better as it feels more realistic to drive. iRacing has actually worked closely with Mercedes to replicate their F1 car model as accurate as possible. Mercedes has sent the iRacing team a lot of data to help and their AMG F1 W12 model feels extremely realistic to drive.

Compared to iRacing, F1 2021 feels a bit more like driving on ice and you don’t really have the same car handling and tyre grip.

iRacing has in fact made a really impressive job with its realistic car physics and great graphics, which is why it’s often considered as the best sim racing game out there.

Pro sim drivers believe that the W12 in iRacing is easier to drive and feels more natural than the official F1 game.

They feel like their easier to drive and the overall mechanical grip feeling is better.

Moreover, sim racer can race with many other online players in iRacing, and the feeling of being able to compete with others who are just as good, or even better than you, is really awesome.

There are also many championships and cash prizes to compete for on iRacing, giving drivers plenty of opportunities to race and improve their skills.

How much is the F1 car iRacing?

Purchasing the AMG F1 W12 will cost you $11.95. You will be able to use this car in all of the series that you have access to.

That’s pretty much the same price drivers have to pay for most additional cars on iracing.

iRacing seems to have way better physics and driving immersion than any other sim racing game.

In fact what you’ll discover when first racing with it is that the game features very realistic car physics and the circuits have been laser scanned with lots of precision.

The tyres, suspension, and chassis all work together to create car handling that feels super realistic in any race condition.

F1 2021 on the other hand, while good, just doesn’t feel as realistic as iRacing.

So, overall, according to the sim racing community iRacing is considered much more realistic than F1 2021, which is why many pro drivers prefer to race on it.

The game’s amazing car physics, graphics, and online community are just some of the reasons why it’s so popular.