iRacing vs RaceRoom: Which is Better in 2022?

Choosing the best sim racing software to use can be a real headache at times.

That’s why we’ve set the time to point out all the differences between iRacing and RaceRoom so that you could get a better perspective of what’s best for you.

Our goal is to help you decide between these two racing software by looking at a few different factors including:

So let’s now get started with our in-depth comparison guide.

iRacing is an elite racing simulation that has successfully emulated a real life racing experience.

In terms of the technicality and skills required, iRacing is highly realistic to a point where real life racers use it to practice their racing skills.

However, this means that driving in iRacing is relatively harder than in other sim racing games.

Just like iRacing, Raceroom is one of those reliable sim racing softwares that has been around for quite a long time. Despite that, Raceroom is much less popular than iRacing and we feel that it is not talked about enough for its quality.

As a free to download racing game, Raceroom has done an outstanding job in providing users with an ultra immersive driving experience.

We have to say that Raceroom is realistic and excellent in general, but the sound quality in this particular software is simply on another level.

In fact, it is one of Raceroom’s strong features that makes it very realistic to drive.

iRacing and Raceroom does not necessarily have the most number of cars and tracks when compared with other racing simulations.

However, they are still highly rated by the racing community for their great variety of cars and tracks.

In iRacing, you can choose from more than 100 cars that covers the following categories:

With those cars, you can race in more than 100 different tracks that are available in up to 350 configurations.

Raceroom has a similar number of cars as iRacing with 169 cars.

However, only 12 are free to use and you will have to pay an additional amount to race with the other 159 cars. The cars are modelled from some of the world’s most elite manufacturers such as Audi, BMW, Mercedes, Porsche, etc.

Amongst all racing softwares that are available on the market, it is safe to say that iRacing is one of the leaders in terms of graphic quality.

Once you race in iRacing for the first time, you will see that there really is nothing to complain about the graphic quality of the software.

Particularly, iRacing is highly rated for their exceptional racing environment graphical details, something that is often overlooked by other racing simulations.

On the other hand, graphics are actually one of the drawbacks of Raceroom.

If you have raced with Raceroom before, you are probably aware that this is the only aspect where Raceroom lacks compared with the standards of other racing softwares. One of the most obvious problems is the way the cars look like they are floating instead of running through the tracks.

Overall, we could not say that Raceroom has a bad graphic quality.

In fact, Raceroom used to be regarded as a racing simulation with outstanding graphics. The only problem is that the current standards in the world of simulation racing have risen rapidly, especially when it comes to graphic quality.

We can all agree that iRacing has the better graphic quality, but Raceroom is still decent and definitely worth a try.

Finally, keep in mind that your PC specs will highly affect your overall graphic experience, so make sure to upgrade your PC if you want the best graphics!

Here’s a quick guide on how to level up your graphics hardware for sim racing. 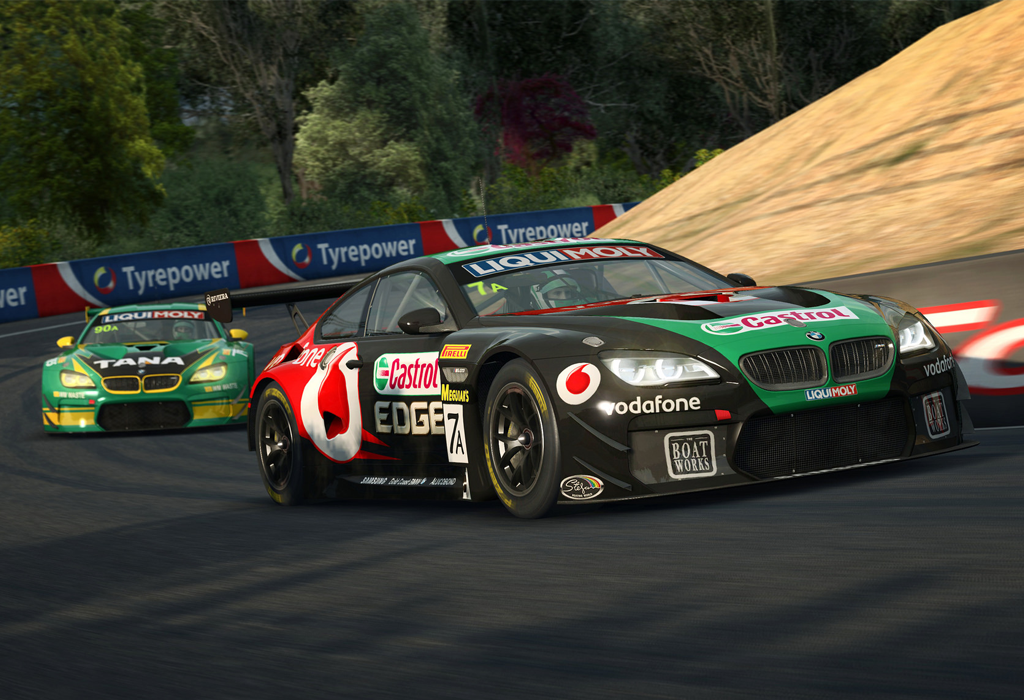 iRacing is well known for their sophisticated car handling system which is relatively harder to control compared with other racing simulations.

For some new users, getting used to the car handling in iRacing can often be frustrating, especially when it comes to handling narrow turns.

However, car handling in iRacing is only so hard because it is very realistic.

Once you get the hang of it, it will contribute to your overall experience, making it much more similar to real life racing situations.

After all, this is one of the main reasons why real life racers prefer iRacing to hone their racing skills.

We mentioned Raceroom not being realistic enough in terms of graphics.

Good for them, their car handling system is nothing less than perfect.

Granted that it may not be as realistic as iRacing, it is much friendlier for racers of different levels, including beginners. Regardless of its easier handling, it is still very realistic when compared with real life car handling.

Bad news for console users, iRacing and Raceroom are only available on PCs.

While a few people may question their decision to stay exclusively for PCs, this comes with a valid reason.

As 2 established software in the world of racing simulation, they believe that PC is the best device for sim racing, allowing better graphics and more compatibility with some of the best racing equipment that you can use.

Running only on PCs also allows them to make updates much easier for their users.

FOV (Field of View) is essentially your point of view when racing in the simulation.

Regardless of whether you use a VR or not, it remains as one of the most important factors that affects your racing experience.

iRacing and Raceroom both have an excellent FOV where it perfectly covers every direction in a realistic manner.

Each simulation racers usually have their own preference when it comes to FOV, which they can conveniently adjust on the settings menu on either simulation, but you can always use the default setting if you have not figured out your preferred FOV settings.

The majority of tracks in iRacing are laser scanned, that is why the track details in iRacing are almost exactly the same when compared side-to-side with the real life version of the tracks.

In contrast, the tracks in Raceroom are not laser scanned. They occasionally laser scanned a few of their tracks but the rest remained unscanned.

While laser scanning does provide another sense of realism, it does not affect your experience in terms of racing performance. Thus, do not close yourself off Raceroom, it is still an awesome racing simulation!

The main premise of iRacing is their online multiplayer race.

iRacing has a highly regarded online multiplayer system where you will be matched with racers of your skill level, which will be determined by your licence.

This famous licensing system is what makes iRacing’s online multiplayer very competitive yet still beginner-friendly at the same time.

Raceroom is also famous for their versatile online multiplayer platform. You can create your own server and race with your friends, or participate in events where you can test yourself out with racers from around the world.

iRacing and Raceroom are both known for their outstanding and precise force feedback.

Thus, it is extremely hard to say which software wins on this particular aspect. What we can say is that the force feedback on both games is highly adjustable and reliable.

As long as you are using a good quality steering wheel, you will not run into any trouble.

Here are the prices and download link for iRacing:

So, which game should you choose in 2022? It depends on your preference and driving style.

I prefer iRacing because of the realism it provides; but some people may like Raceroom’s arcade-like feel.

Whichever game you choose, make sure you check out one of these games today!