The ACC developers have been very busy lately pumping out DLCs with exciting new cars and tracks, but one legendary circuit is still missing.

The Nordschleife, also known as “The Green Hell”.

Why is the Nordschleife not included in ACC?

The reason is probably because the SRO GT World Championship doesn’t have any race in the calendar at the Nordschleife, despite having an endurance race in the Grand Prix version of Nurburgring.

GT3s still race there in the very famous Nurburgring 24 Hours, but that race is not part of the GT World Challenge.

Do you think ACC should add Nordschleife in the next DLC release?

I know a lot of sim racing drivers out there would love to see this track added to the game.

The Nordschleife is a real challenge for any driver, and it would be great to see how well we can do on it. 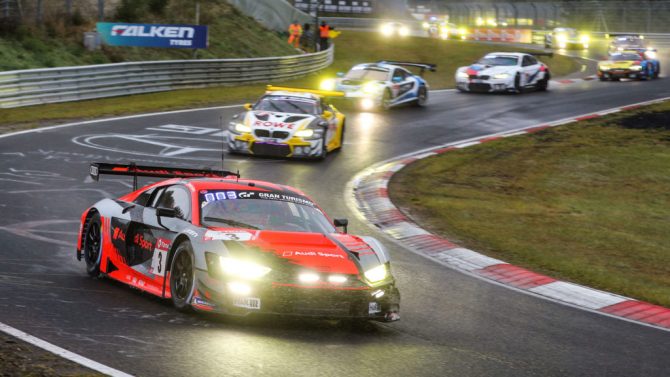 Plus, it’s just an amazing track that everyone should have the chance to drive.

Why is the Nordschleife so special?

With all its incredibly fast corners followed by long straights and blind sections, the Green Hell is definitely one of the most demanding tracks in the world, if not the most.

You really have to take big risks there and hope you’ll not end up in the wall, or even worse, in one of the many trees that line the circuit.

The Nordschleife is a 20.8 km long and the fastest GT3 times have been just below the 7 minutes mark with a 6:54.

Will ACC add Nordschleife in the next DLC release?

We can’t know for certain but we can speculate that the Kunos may consider adding the Green Hell to a future DLC release after many requests from sim racing the community.

So as you can see, the Nordschleife is a very special track that has a lot of history behind it.

It’s a real challenge for any driver and it would be great to see it added to ACC.

Do you think the ACC developers should add Nordschleife in the next DLC release despite not being part of the GT Worl Championship?

Let us know and we’ll keep you updated!

Does ACC have the Nordschleife?

No, ACC doesn’t feature the Nordschleife since it’s technically not part of the GT World Championship calendar. That’s a shame since the Nordschleife is one of the most iconic and challenging tracks in the world.

However, there’s always a chance that ACC will add it in a future DLC release.

When was the Nordschleife built?

When will ACC add the Nordschleife?

We can’t know for certain but we can assume that the Kunos may consider adding the Green Hell to a future DLC release before the end of 2025.

How fast are GT3 cars at the Nordschleife?

However, the average lap time for a GT3 car is around 7 minutes and 15 seconds.