Have you been wondering what TC2 was and what the difference from TC1 actually is?

Many sim drivers have had this thought to their mind, but kept on driving without really knowing the answer.

So here’s a guide to help you understand the difference and make the best choice for you and your racing.

That means that it’s adjustable purely based on how early or how late do you want the TC to kick in at the exit of the corner.

This can be useful if you’re struggling with rear traction and you want the car to feel more planted, especially in the earlier phase of the throttle application or even at the initial throttle pick-up.

What’s the value range of TC1 in ACC?

The TC1 goes from a minimum level of 1 to a maximum level of 11 and the lower the value, the earlier it will start working and the more intrusive it will feel at the initial throttle application.

The default value is around 5 and 6 and if there’s lots of grip you could even run it to 3 or 4 on new tyres.

It’s never good to have it set at one of the two extremes since it will either make the car feel very oversteery at the exit of the corners or bog down the engine too much with very little torque.

Assetto Corsa Competizione’s TC2 is the traction control responsible for how much the TC actually cuts the power.

This is different from TC1 because it’s focused on how much power is being cut and not when the traction control actually starts operating. 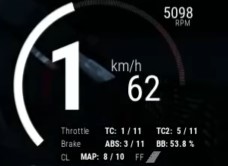 This can be useful if you’re struggling with traction or if you’re looking to preserve the rear tyres in the earlier stages of a race.

What’s the value range of TC2 in ACC?

TC2 goes from a minimum level of 1 to a maximum level of 11 and, as with TC1, the lower the value, the more aggressive it will feel.

Unless it’s wet and the track is very slippery, you won’t ever need to go above 7 or 8 since it will reduce your acceleration performance and you won’t really benefit from the smooth exit understeer.

High values will make the car cut the ignition on throttle reducing the overall power output and making the car fairly slow in the exits.

On the contrary, a too low value of 1 or 2 will make it quite unpredictable to drive and hard on the rear tyres unless you’re able to be super smooth on the throttle pedal.

The default value is 5 – 6 and it’s a good starting point to understand how the car feels.

If you’re struggling with rear tyre wear, you can try to increase it to 7 or 8 but be careful to not reduce the exit speed as a consequence.

A good tip is to find a happy medium between the two values: not too low that it feels oversteery and not too high that it cuts the ignition completely on throttle.

I usually prefer keeping a lower TC1 and medium TC2 as it allows me to rotate the car nicely on throttle early on (when?) without causing too much push understeer (how much?), especially in qualifying where the rear grip is maximum.

In the end it also comes down to preference and driving styles, so try different settings and see what works better for you.

As a rule of thumb remember that a slightly oversteery setup is better for setting a fast lap time in qualifying whereas a more understeery setup makes the rear tyres last way longer in the race.

So have that in mind the next time you’ll be finding the sweet spot with your TC1 and TC2 traction control settings. 😉

To sum up, these are the main differences between TC1 and TC2 in Assetto Corsa Competizione:

The lower the value of TC1, the earlier it will start working and the more intrusive it will feel at the initial throttle application.

For TC2, the lower the value, the more aggressive it will feel throughout the whole exit.

Hope that was helpful, good luck and happy sim racing! 🙂