How to Setup iRacing in VR (Reviews & Settings)

If you’re deep into iRacing, then you’re probably always looking for ways to improve your performance.

And one of the best ways to do that is by using a VR headset. VR gives you the ability to immerse yourself in the race and truly feel like you’re behind the wheel.

But with so many VR headsets on the market, it can be tough to know which one to buy. That’s why we’ve put together this iRacing VR review.

We’ll tell you what we think about the game and how it performs in virtual reality, as well as some setup tips from other fellow sim racers.

So if you’re looking to take your sim racing experience to a whole new level, let’s get started.

Does iRacing have VR?

Yes, you’ll be amazed once you discover it! I think that the VR for iRacing is really realistic, and it’s only going to get better with improved level of immersions.

The experience of being inside the car and looking around is really phenomenal and it’s something that you have to try for yourself.

How do you use VR in iRacing?

For you to get started with VR you’ll want to be using Steam VR.

Here’s the step by step process you’ll need to follow: 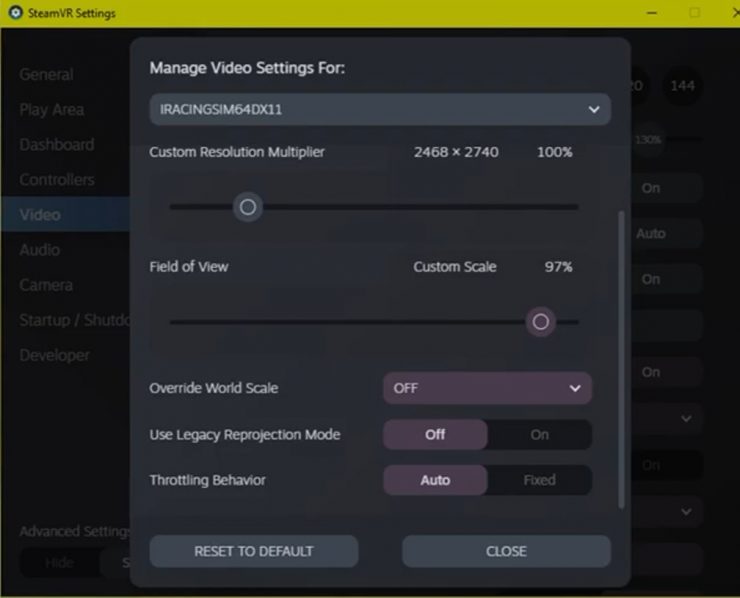 Let’s now have a look at the entire iRacing Headset device library you can use behind the wheel:

Let’s take a closer look into each of these VR headsets for iRacing.

The Oculus Rift is one of the most popular VR headsets on the market and it’s been around for a few years now.

It’s a great headset for iRacing because it offers some good features and stunning graphics.

From what it looks like on Reddit, the Oculus Rift S seems to be the most praised by the sim racing community.

The HTC Vive is another great VR headset that’s been around for a while now.

It offers a great VR experience and it will be perfect for your iRacing career.

Recently, HTC has also released the Vive Pro which is an upgraded version of the Vive. It offers some great new features, such as a higher resolution which is obviously a plus when it comes to sim racing and spotting the best braking points.

The Pimax headsets are some of the most recent VR headsets to hit the market and they offer some pretty impressive specs.

Though they may not be as popular as the Oculus Rift or HTC Vive, they’re definitely worth considering if you’re looking for an immersive VR experience.

What VR headset is best for iRacing?

The Oculus Rift S. Its awesome graphics and features make it the perfect VR headset for iRacing.

Now that we know a bit more about which VR headsets to use, let’s shift the focus towards the appropriate PC system requirements needed to guarantee a flawless driving experience.

As you can see I’ve presented both minimum and recommended specs so that you can have an idea of what to aim for when building your PC or figuring out whether your current one is good enough.

In terms of graphics settings, you’ll still want to be careful and make sure they’re properly set to avoid frame drops and lags, as it can really ruin your iRacing VR experience.

Have a look at this screenshot where you’ll get an idea of where to start in terms of graphics and video settings.

When it comes to performance, it’s important to stress that each PC is different and that the recommended specs may not be the same for everyone.

That’s why it’s important to monitor your FPS (frames per second) and CPU/GPU usage while you’re in a race. This will give you a good idea of whether your PC can handle the VR experience or not.

That being said, people normally get around 45-60 FPS when playing iRacing in VR so that can be a good target for you to start.

If your PC falls below the minimum specs I mentioned earlier, you might still be able to play the game, but you’ll likely have to turn down some of the graphics settings, or else you’ll experience frame drops.

Is iRacing VR worth it?

It absolutely is! If you have the right PC specs and graphics settings, iRacing in VR will be an amazing experience that is going to take your sim racing to a whole new level.

Plus, with new future VR headsets releases, it can only get better! 🙂